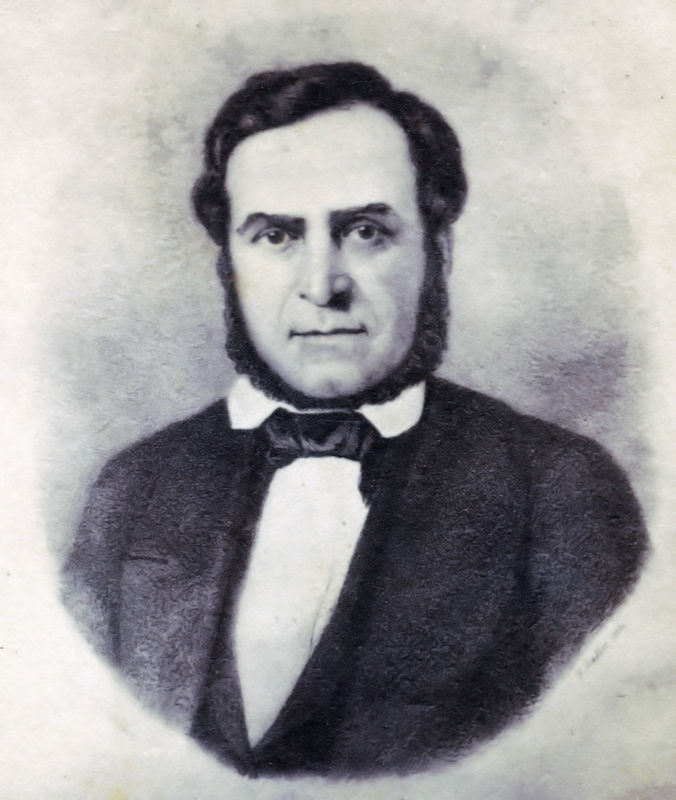 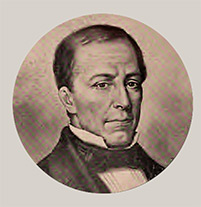 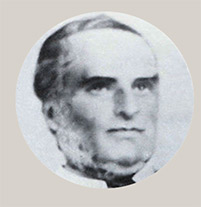 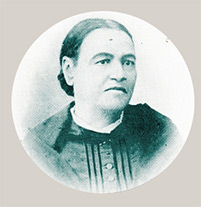 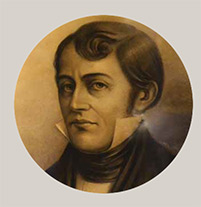 Mora, Juan Rafael (1814 – 1860), the Father of the Nation. First-born of Camilo Mora-Alvarado and Ana-Benita Porras-Ulloa was born a Spanish subject on February 8, 1814 at the city of San José, within a family dedicated to public service. His second cousin Juan Mora-Fernández was Costa Rica’s first Head of State for nine years; his brother Miguel Mora-Porras and his second cousin, Joaquín Mora-Fernandez, were also presidents during brief periods. He learned the first letters and numbers in the House of Teaching of St. Thomas, although, strictly speaking, his formation was self-taught.

Was only 14 years old when independence from Spain came and changed it all after three centuries of colonization. Since he was a teenager, he had been involved in commerce, real estate brokerage and other businesses for which he was emancipated by his father. He was known as Don Juanito for his affection by the people and clarity in business and personal relationships. At the death of his parents, he assumed the guardianship of his nine siblings and when one of his sisters passed away, did the same with his three nephews; He remained single while his relatives didn’t get married. Married at the age of 33 with Inés Aguilar-Cueto, daughter of former President Manuel Aguilar-Chacón, marriage that procreated four girls and three boys.

He made numerous business trips on sailing ships to Europe, North America, Central America, the Caribbean and South America, during which he established relationships of friendship with people of influence, experienced the innovations of the Industrial Revolution, learned about credit and banking, read about thinkers like Andres Bello and Domingo-Faustino Sarmiento, studied Simón Bolívar and George Washington, assimilated liberal ideas about the organization of society, in short, this way he completed his education at “the university of life”. He prospered with the farming, processing and export of coffee, as a shipowner and in the mining of gold until becoming one of the richest and most prestigious men in the country.

His attributes as a business leader took him almost naturally to public service. Elected the First Mayor of San Jose at 23, he was soon called to the military service of the State. Elected deputy, he was Vice-President of the Constituent Assembly that adopted the constitution of 1844. The same year he was elected Vice-President of the State, position in which he stood out for his energy in the control of a military rebellion and his globalizing vision during the economic crisis of 1848. After 18 months of having left this position and dedication to his business of international trade, returned to public service as Vice President of the Republic.

He led the process that engendered the Revolution of Costa Rica, a decade in which the old colonial ideas were replaced by modern ideology of order and progress. He founded and strengthened the institutional scaffolding that sustains the republic, decreed shortly before his first term of office. He promoted the cultivation of coffee, European commerce and ordered the construction of roads and bridges, favored the incipient industry, renewed the legal framework for development, opened the first bank and ordered the public finances. He regulated public health, founded a school of medicine and the medical society, built the San Juan de Dios hospital and the hospital of Puntarenas. Fixed the price of basic necessities, distributed farmland to the poor and introduced mutuality through popular savings banks. Declared mandatory education for “all classes of society,” in the manner of the law of education in Sweden, and established funds for the public instruction because “the most imperative duty of the Sovereign is to provide the youth with education”. So many changes in such little time made of the respected businessman a controversial and opposed statestman in a nation that was leaving behind the colonial mentality to enter republican and capitalist modernity of the time.

Halfway through the Morista decade, the young republic was the victim of a military invasion impelled by the slavery expansionism of the United States. The filibuster phalanx seized Nicaragua, its ringleader William Walker had himself elected constitutional president. The only government that legitimized him by diplomatic recognition was the United States. President Mora dedicated a portion of the wealth generated by the coffee trade to raise the best army in Central America with the objective of defending territorial integrity in the face of possible armed invasions. The Constitutional Congress authorized him on 28 February 1856 to declare war against the filibusters, he personally led the Expeditionary Army and the people united patriotically around their commander. The Central American Patriotic War had four objectives: the national one for the defense of sovereignty, the regional for the liberation of Nicaragua, the continental for the Latin American freedom and the universal for the fight against slavery. Three of the major battles were won within the territory of Costa Rica: Santa Rosa on March 20th, Sardinal April 10th. and La Trinidad on December 22nd. After the triumph of Rivas on April 11th, an outbreak of Asian cholera broke out and infected half of the population of Costa Rica of 120,000 inhabitants and killed almost 10,000 people. With the allied armies of Guatemala, Honduras, and El Salvador, Costa Rica reached victory on May 1st. 1857, on which day, Walker was expelled from Central America. If, in 1821 emancipation of the Spanish colonial empire was achieved, in 1856 the Second National Independence was conquered by fire and blood.

In addition to his political leadership, President Mora acquired the characteristic of a Military Leader. Opponents who disagreed with his progressive policies conspired against him the day that the doors of the National Bank of Costa Rica opened. At the price of 20,000 dollars they rented the allegiance of some military chiefs who imprisoned him to be banish. The de facto regime then began a propaganda campaign aimed at destroying his good name as a businessman, statesman and soldier. At the urging of his supporters, he landed at Puntarenas; defeated within a few days, he surrendered under false promises and was assassinated on September 30th, 1860. The murder of his character lasted for a century and a half.  However, the Legislative Assembly recognized in 2010 that “because of circumstantial misunderstandings he  was overthrown in 1859 with of the unacceptable breakdown of the constitutional order and in 1860 he was shot in a state crime, that is still embarrassing us, caused by the collision of material and personal interests alien to the common good of the nation. On the 150th anniversary of his death, we, the nation’s representatives, decided to make amends with both mistakes that undermine the dignity of the republic”. The Legislative Power proclaimed him Liberator and National Hero.

Costa Rica, which celebrated in 2014 the bicentennial of the birth of the Father of the Nation, bases its national identity on the thought and trajectory of Don Juan Rafael Mora.